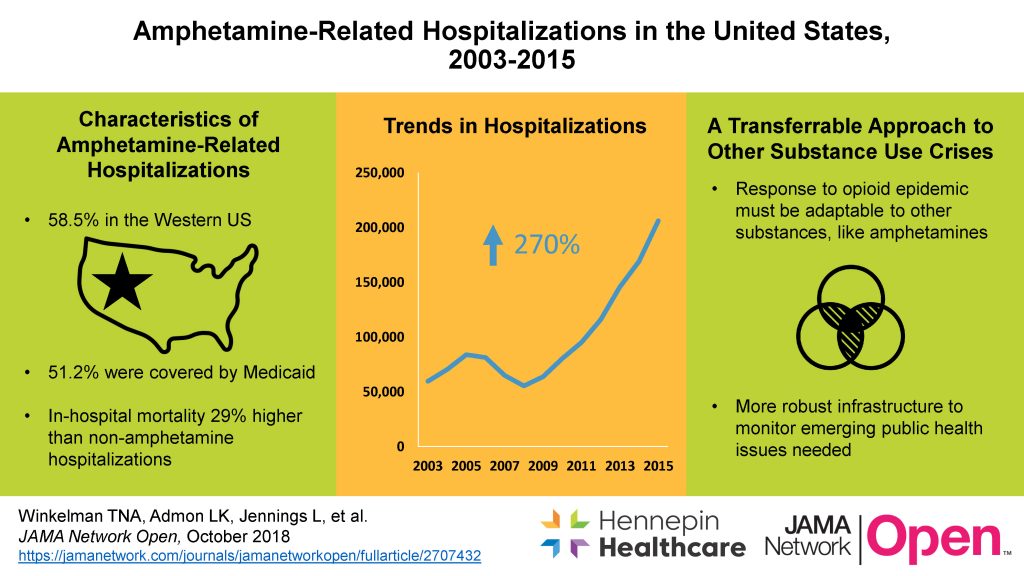 An analysis conducted by Hennepin Healthcare, University of Minnesota School of Public Health and University of Michigan researchers shows amphetamine-related hospitalizations increased more than 270 percent from 2008 to 2015, costing up to $2.17 billion per year.

The study was recently published in JAMA Network Open.

“It’s worrying,” said Associate Professor and co-author Nathan Shippee. “The sharp increase in amphetamine-related hospitalizations suggests the need for a public health response; yet, we lack the kind of treatments that we have for opioids.”

After a period of decline in the mid-2000s, the reemergence of amphetamine use comes as the public health field pushes to address the ongoing opioid crisis.

To learn more about the scope of the amphetamine problem, the study’s lead author Tyler Winkelman and co-investigators analyzed national hospital data on 1.3 million amphetamine-related hospitalization cases in the United States.

The researchers point out that, unlike opioids, there are no medicines for amphetamine-use disorders.

“Hospitalizations related to amphetamines were associated with thousands of deaths over our study period,” said Winkelman, a physician with Hennepin Healthcare and assistant professor in Internal Medicine and Pediatrics at the University of Minnesota. “We can’t just focus our attention on opioids. The nation’s response to the opioid epidemic needs to address other substances like amphetamines too.”

The study suggests the United States needs to develop improved strategies that prevent people from developing substance use disorders and new drugs and treatments for people who already have them.

“Not only did hospitalizations related to methamphetamine increase most dramatically, we found hospitalizations related to alcohol and most other drugs increased,” said study co-author Gavin Bart, a physician and director of Addiction Medicine at Hennepin Healthcare HCMC and associate professor of Medicine at the University of Minnesota. “This underscores the importance of the hospital as a key focal point for initiating treatment for substance use disorders."